Turkish Reports To The XIXth International Congress Of Comparative Law 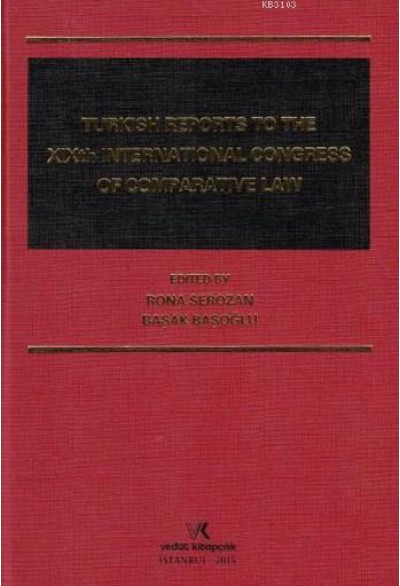 Turkish Reports To The XIXth International Congress Of Comparative Law

The articles collected in this volume are consolidated from the Turkish reports submitted to the XIXth International Congress of Comparative Law organized by la Société de Législation Comparée and the International Academy of Comparative Law in Vienna from 20 to 26 July 2014.
La Société de Législation Comparée founded in 1869 and the International Academy of Comparative Law founded in 1924, are the pioneer institutions of the comparative law research. With collaboration, these institutions convene the International Congress of Comparative Law at intervals of four years since its first gathering at The Hague in 1932 in order to provide the scholars from different legal systems an occasion to examine current problems on all major disciplines in both private and public law. Undoubtedly, this prestigious Congress gives a decisive drive to the development of the comparative method.
In the XIXth Congress, scholars from different legal systems discussed 32 recent issues upon the submission of numerous national reports on every single subject. These national reports are based on questionnaires drafted by renowned experts acting as general reporters for the subject concerned.
There is an old tradition in the Academy that all national reports from one jurisdiction are published in a single volume. Also, subject-based reports and the general reports are compiled as separate volumes. So far, Turkish reports have been published in different volumes for the subject-based reports and the general reports. Yet, a volume dedicated to the Turkish reports has never been published.
In the XIXth Congress, Turkey was successfully represented with eight national reports and one general report. The reports submitted by the Turkish reporters were on subjects ranging from the effects of financial crises on the binding force of contracts to the disgorgement of profits; from the license contracts, free software and creative commons to the personal guarantees between commercial law and consumer protection; from the review and recognition of foreign arbitral awards to the contractualisation of family law; from the proof of and information about foreign law to the damages for the infringement of Human Rights.
Presentations made by the Turkish reporters arouse great interest and appreciation during the Congress in Vienna. Accordingly, it seemed to be appropriate to initiate the first volume of Turkish reports submitted to the International Congress of Comparative Law.
This volume constitutes a clear proof of the full validity of the comparative method in the Turkish legal literature and the well-respected position of the Turkish jurists in the international arena.
We would like to thank all the national reporters, whom with their valuable works have contributed to the success of the XIXth International Congress of Comparative Law and to the publishing of this book. Also we would like to thank the publisher Vedat Kitapçılık and especially its general manager,   Mr. Vedat Carbaş who have kindly published this volume for the sole benefit of enriching the legal literature.

General Report on the Effects of Financial Crises on the Binding
Force of Contracts: Renegotiation, Rescission or Revision
Rona Serozan    1

The Adaptation of the Contract in Turkish Law
Başak Baysal    65

Contractualisation of Family Law: Is it possible in Turkey?
Kadir Berk Kapancı    97

The Treatment of Foreign Law in Turkey
Zeynep Derya Tarman    133